How will the new accounting standard, IFRS 15, affect processes for CFOs? 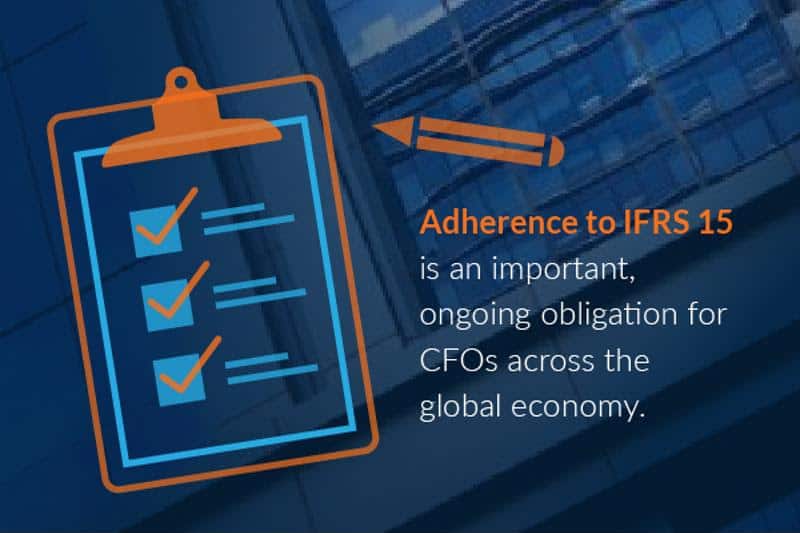 International Financial Reporting Standard (IFRS) 15 has been a long time coming. The regulation was originally developed by the International Accounting Standards Board (IASB) starting in the early 2000s, with proposed standards issued roughly 10 years later and the final version adopted in 2014. Officially put into effect at the beginning of 2018, IFRS 15 focuses on providing best practices and guidance for reporting revenue stemming from the contracts a business enters into with its customers.

With several months of operation under this standard already completed, it’s important to consider how IFRS 15 has and will continue to affect the many processes related to it used by CFOs.

What IFRS 15 means for CFOs

The most direct and clearest impact of the new standard is a change in the way companies report contract revenue. IFRS 15 specifically requires the use of a five-step progression to determine when revenue should be recorded as well as the specific amount. As KPMG pointed out, the straightforward explanation is businesses should tie the revenue to the period when the organization supplies the goods or services to its client. The monetary figure involved should be the reasonable expectation of the amount that will be received from that client. For goods or services provided over a period of time, selecting an accurate measure to determine partial completion, and the associated revenue, is the approach endorsed by the IASB.

For CFOs, this obviously means changes to the way revenue reporting and accounting workflows related to it function. However, according to Financial Executives International, there is a bigger picture to consider. Because CFOs are increasingly removed from the financial and accounting silos they once occupied to play a greater role in overall business decisions, they have a responsibility to help other parts of their companies adapt to IFRS 15.

One example from FEI is the initial structuring of contracts with customers. While the legal department will retain ultimate control of that process and many other stakeholders have important roles to play, CFOs should offer suggestions and guidance that lead to better adherence with IFRS 15 rules and ultimately make the accounting process simpler.

Another area to consider, highlighted in a separate article from KPMG, is the timing of when accounting staff record revenue from contracts. With an emphasis on defining distinct tasks or provisions of goods and tying the recording of revenue to them, the timing of revenue reporting can change significantly. That has a ripple effect on on KPIs, which have impacts inside and outside the finance department. Catching these issues early on and discussing them in very different contexts – with board members and with finance-focused staff – will help CFOs ease the transition to the new standard.

Adherence to IFRS 15 is an important, ongoing obligation for CFOs across the global economy. A wide variety of businesses can enhance compliance, reporting and other processes related to it through the reliable, transparent use of outsourced accounting. To learn more about this powerful solution, get in touch with Consero today.

PrevPreviousIn-House or Outsource? How Outsourcing Finance & Accounting Saves Time and Money
NextThe rise of AI: How automation will affect the CFO’s role in the futureNext
What's Included in FaaS
Industries We Serve
Contact Us