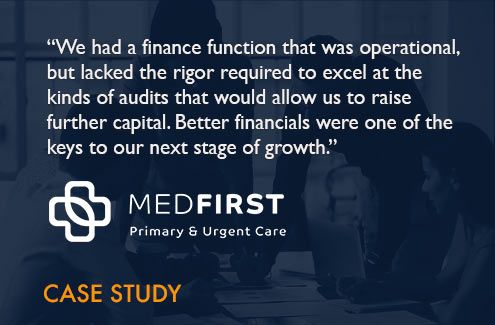 RMS Healthcare is the Managed Services Organization (MSO) that manages the Med First network of clinics. RMS knew its potential as a leading MSO but understood its finance function needed an upgrade to raise the capital for its next wave of acquisitions. This is how Consero, with their Finance as a Service (FaaS) model helped them do just that.

When a private equity sponsor first invested in Med First back in 2016, the value proposition was clear and compelling. As a Managed Services Organization (MSO), Med First provides the administrative functions, including eligibility, billing, verification, HR and legal for a network of primary care and urgent care clinics in rural North and South Carolina, communities traditionally underserved with sparse healthcare options. They allow providers to focus on patients, leading to better health outcomes. MSOs are natural platforms for roll-up acquisitions since there is no shortage of these facilities that could benefit from an administrative upgrade.

But after an initial acquisition spree that grew the company from 9 clinics to 19 under its umbrella today, Med First found itself with having to hire a new CFO. The new CFO, Wes Edwards, had joined Med First after the successful sale of the specialty pharmacy company, Avella. While at Avella, Edwards had a traditional in-house accounting and finance staff.

“Med First had naturally focused on the clinical side of things, because you can’t have a world class organization without solving the problems of patients,” says Edwards. “And with over 150,000 patient interactions a year, there was plenty to do on that front, and plenty to be proud of.”

But Edwards also knew that as CFO, he had to upgrade the finance function. Edwards soon learned that current team couldn’t handle the complex, multi-entity nature of the business. They had moved from QuickBooks to Great Plains, but without optimization. The internal process and infrastructure couldn’t scale, which hindered the sponsor’s ability to manage their portfolio company with the care and agility they usually do. And given the situation, the former CFO devoted substantial time to matters of accounts payable/ accounts receivable, staffing and technology.

Finding a Solution That Scales

By the time they tapped Edwards as CFO, Med First was already considering Consero as an outsourced option for their finance function. But Edwards had come from managing an internal team, and had some success, along with some misses, in that model. “Nobody gets staffing perfect, but I had a good experience with my in-house team,” said Edwards. “Still, Consero looked attractive for solving the staffing burden, but that was only part of the decision to hire them.” Edwards understood that the healthcare sector put unique pressures on the finance team. “There are numerous accounting issues, like being paid by third parties in complicated ways, being underpaid and overpaid, sometimes with missing information, making basic revenue recognition a real challenge to the current team,” said Edwards. And Consero had plenty of experience with this kind of revenue recognition, but that was only one element of the requirement for Consero to modernize the Company’s finance function.
“Med First had a finance function that was operational, but lacked the rigor required to excel at the kinds of audits that would allow the Company to borrow from a bank, or raise further capital,” said Edwards. “And given the desire to build through acquisitions, better financials were one of the keys to our next stage of growth.”
Edwards knew they were in no position to get there with a small staff that needed significant training. “I was blessed with a sparsely filled cupboard, because it made the choice to outsource all the easier,” admits Edwards. The alternative was to spend the next two to three years building and training a team from scratch, and the pace of private equity investments demanded a faster solution.

Getting an Accurate Heartbeat of the Numbers

The partnership with Consero was solidified shortly after Edwards joined with the blessing of the Company’s CEO, Paul Feneck and its Board of Directors. Consero’s skilled team moved quickly to clean up the core finance function, and revamp the monthly close process, shortening the time to complete it. They moved Med First to Consero’s Simpl® software stack that simplified the consolidation process for all those multiple entities. Consero also produced timely and accurate reports for all stakeholders.

“Globally, reporting became a lot less stressful,” said Edwards. When he started, Med First was ostensibly on accrual accounting, but there was still a lot of cash basis situations, and with Consero’s processes and discipline, they’ve been able to accrue all expenses and avoid any timing issues.

“This is a business that really focuses on net revenue per patient visit, so when you’re on a cash basis, that number goes up and down all the time, because of bank holidays, or months with five Fridays or five Mondays, all of which creates fluctuations,” says Edwards. “But now the fluctuations that show up are real and indicate business realities instead of accounting anomalies.”

Time to Focus on Value-Added Activities

At the company’s current size, Med First hasn’t chosen to invest in a Chief Operating Officer (COO), so that’s a role that gets split between Mr. Feneck and Edwards. “With Consero handling the basics, I’ve got the time to play that ad hoc COO role, and get into things like value-based reimbursement,” said Edwards. “For example, I’m hopping on a conference call with providers tonight to talk about the importance of preventive care, our quality incentive programs and our new compensation models, instead of wrestling to close the monthly books on time.” With Consero on board, Edwards has been able to spend his time on strategic imperatives and now the Company is poised to resume its acquisition strategy, with a number of negotiations already in process. “When I joined, we had several clinics not yet generating positive EBITDA and now we’ve achieved strong consolidated EBITDA and very good clinic margins, which we aim to continue to improve, but there’s no question this was a huge move in the right direction,” said Edwards. “Even more importantly, we’ve earned investors’ confidence that we can continue this progress. That has allowed us to get back to exploring acquisitions.”

Download Now
PrevPreviousConsero Roundtable: Security and Controls in the Finance Function
NextAlgo leverages Consero’s Strategic CFO Services to get the finance function in order before they could pursue acquisitionsNext
What's Included in FaaS
Industries We Serve
Contact Us