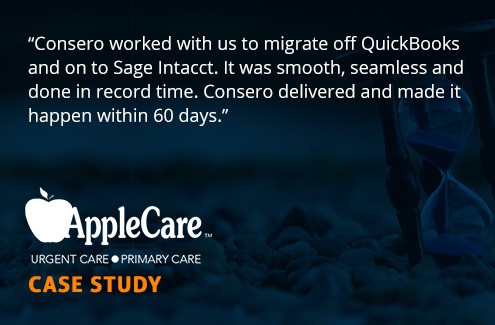 AppleCare’s finance team wasn’t just missing out on insights contained within accounting data. It also had patient billing information tied to electronic medical records that could be used to understand business performance in close detail. It was critical for AppleCare to get an accurate and timely view of metrics like cost per visit or a breakdown of outpatient procedures by type. Working with Consero gave AppleCare the ability to calculate those KPIs quickly using data that AppleCare had been collecting for years.

As CEO of AppleCare Doctors in Savannah, Georgia, Chase Finley was too tied up in the daily grind of finance and accounting management to focus on almost anything else. Short on time and resources, it wasn’t just a struggle to find the most capable doctors and nurses, Finley explained – it was also difficult to find the finance and accounting staff and systems that support them.

“From the inception of the company, it has been difficult to hire high-caliber talent in rural South Georgia,” Finley said. “Simply put, it is hard finding and retaining talented finance people.”

While AppleCare is headquartered in Savannah, the third-largest metropolitan area in Georgia, it currently operates 13 clinics throughout the region, with a staff of around 170 serving approximately 150,000 patients per year. AppleCare needs to manage annual revenues of around $17 million, along with the myriad rules and regulations governing health care administration.

That’s why Finley and Greenridge Investment Partners, the private equity firm that supports them, brought in Consero to streamline their financial processes and capitalize on the data they were already collecting.

“Without Consero, we would’ve been in a significant bind,” Finley said. “In many aspects, there’s been a night-and-day difference.”

With years of experience in health care administration, Finley came on as President and COO of AppleCare in 2013. Almost immediately, he realized that the company’s finance and accounting processes would put a damper on its plans to grow and expand geographically. In fact, Finley said he essentially had to act as the de facto CFO and even CEO in the understaffed organization.

“That’s not abnormal for smaller, growing companies, but I had to bridge the gap between what our controller was doing and what a CFO would do in a larger company,” Finley said.

Meanwhile, AppleCare’s controller was stuck in the mud of transactional accounting work, the type that is essential to maintain cash flow and produce necessary reports, but only consumes time and effort without adding value. This left little room for the forward-thinking work that charts a course for the long-term viability of a company.

“Growth development and planning was all pro forma, and things like income statements or working capital needs were on my plate,” Finley said. “Neither of us were the people with the right credentials to do that in the best way possible for the company.”

According to Jack Cardwell, who works with AppleCare as co-founder and partner of Greenridge Investment Partners, this situation was making things difficult for his team to do what was best for the company, too. As the board of directors for AppleCare, the role of Greenridge is to allocate capital and seek the best possible outcome from their investment. But as Cardwell explained,

“If you don’t know what the score is, you can’t deploy the right strategies.”

The situation Finley and Cardwell found themselves in is not unusual among finance chiefs. A survey of U.S. CFOs from Duke University’s Fuqua School of Business estimated almost 90 percent of firms do not pursue value-enhancing projects. This is primarily due to a lack of available finance talent, and almost no spare time to devote to forecasting and planning.Working beyond their capacity, Finley and his miniscule finance team were treading water. Mired in the trenches of transactional work and basic reporting, they could not deliver the actionable information Greenridge needed to make high-level management decisions. Cardwell noted that Greenridge analysts would also need to spend time verifying the accuracy of the data, leaving little room for any kind of forecasting or planning.

“We were doing basic accounting, working in the GL [general ledger] just to piece the financials together and make sure we were confident with the numbers,” Cardwell said.

Where Consero comes in

AppleCare’s finance team wasn’t just missing out on insights contained within accounting data. It also had patient billing information tied to electronic medical records that could be used to understand business performance in close detail. Particularly in his role as COO, it was critical for Finley to get an accurate and timely view of metrics like cost per visit or a breakdown of outpatient procedures by type. Working with Consero gave Finley the ability to calculate those KPIs quickly using data that AppleCare had been collecting for years. Finley and Cardwell agreed that the value of Consero’s services was not borne out in cost-savings alone, but in the time and effort they can now devote to ambitious expansion plans. By the end of 2017, AppleCare will have opened five new clinics in the span of a year and continuing to provide the best possible care to the patients they already serve.

Making these plans come to fruition while keeping the rest of the organization humming along would’ve been difficult for Finley, Cardwell and AppleCare had it not been for Consero.After closing two older clinics in August, AppleCare and Greenridge had to juggle even more moving parts involved in consolidating financial records and preparing for upcoming acquisitions. Finley knew he would need to free up his controller to handle the complex work involved with this process, including:

Before bringing Consero into the fold, Finley confided that his controller would have been tasked with much of this work in addition to routine transactional tasks – and they still wouldn’t have time to understand where the business was headed financially.

“The main benefit of Consero came from lightening the load off our day-to-day operational functions,” Finley said. “Taking that off the plate of folks locally allows us to focus on fine-tuning new financial models as we grow and develop.”

Prior to working with Consero, Finley estimated that at least 25 percent of his work week was spent on some of this transactional work. Already putting in at least 60 hours of work in an average week, he would sometimes need to spend nights and weekends poring over reports and checking their accuracy.

Now, Finley and his finance team can offload or automate much of that work thanks to Consero’s intuitive integration between back-office accounting data and the reports that go out to Finley and Greenridge. Finley said he could always count on his controller to get work done on time, but that he and the Greenridge team now felt much more confident in the accuracy of their reporting, allowing them to understand the bigger picture behind the numbers.

“We aren’t in the GL nearly as much now,” Cardwell said regarding how streamlined his relationship with Finley and AppleCare has become. “Consero gives us a baseline set of financials that we can be confident in and make projections from, instead of trying to recreate history.”

Another major hurdle facing AppleCare and Greenridge involved the limitations of their accounting software. AppleCare had been using QuickBooks to support its basic back-office accounting functions, but very soon after beginning his role at the company, Finley realized it was poorly integrated and flawed from the start. They could no longer add new accounts to their system, and it was soon clear that the AppleCare team would need to undergo the monotonous task of switching to a new platform.

Consero not only provided them with that platform via Sage Intacct, they also completed the integration and data transfer at least one month sooner than Finley had expected.

“Any implementation takes some effort and commitment, but I would say Consero working with us through this migration off QuickBooks on to Sage Intacct was as smooth and seamless as it could’ve been,” Finley said. “It was done in record time. We thought there was no way it could happen in less than 90 days, but Consero delivered and made it happen within 60.”

Thinking ahead with Consero

With such a massive project out of the way so quickly, and now taking advantage of Consero’s forecasting capabilities, Finley and Cardwell agreed that both of their teams were already noticing improvements in their operations.

“When the back-office is not working, it takes up time from work that can actually move the needle for the business,” Cardwell said. “Businesses in growth-mode can’t afford that wasted time. Consero gives Chase the freedom to focus on those critical initiatives, and we have already covered ground that I don’t think we would have covered.”

That makes Consero’s financial solutions just as valuable to private equity firms like Greenridge as it is for AppleCare as it evolves to meet the needs of its patients.

“We had strategic partnerships in development for the last 18 to 24 months before Consero came in in June,” Cardwell said. “[As of October], we are only a couple of weeks away from closing those deals. With all the time Consero is saving us, I don’t think that’s a coincidence.”

The ultimate benefit to AppleCare is that Consero’s “Finance as a Service” model gives them less backward focus and more forward focus. There is more trust in the numbers and less time validating where they are. Today, AppleCare spends more time on where they are going.

Download Now
PrevPreviousBeyond Outsourced Accounting:
How “Finance as a Service” Provides Decision-Driving Insight for CEOs
NextHow CFOs can enable their directors, and vice-versaNext
What's Included in FaaS
Industries We Serve
Contact Us