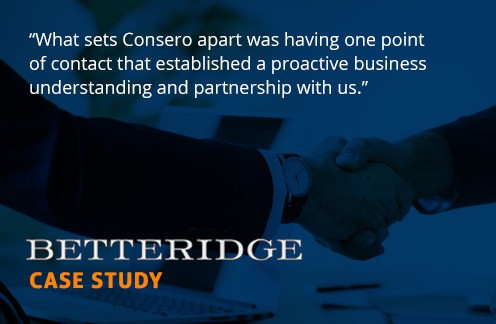 Every turnaround CFO has a story to tell. Many have walked into chaos and have taken years to establish order. As the newly installed CFO of Betteridge Jewelers, Nick Fischer was faced with many key tasks, from getting up to speed with the company’s financials to organizing accounting records. Beneath all of these was one key objective: Growing Betteridge from an annual revenue of approximately $100 million to around $500 million in 10 years.

If he was to achieve this goal, Fischer knew he had no time to waste. He had to help streamline and improve their key finance and accounting procedures in an accelerated timeline. With that task checked off, Betteridge sets its sights on the kinds of transformation growth that would make that 10-year sales goal possible.

Prior to joining Betteridge in 2016, Fischer came through the FP&A ranks with Nordstrom and Capital One, allowing him to get a first-hand look at what separates typical F&A practices from top performers. From his education and professional experience, one adage from business management guru Peter Drucker always stood out in Fischer’s mind: “If you can’t measure it, you can’t manage it.” However, upon taking the reigns at Betteridge, he found there were plenty of measurements falling through the cracks.

“After I started at Betteridge, I began working with the interim CFO, and very little was being measured or analyzed,” Fischer said. “The former CFO was doing a cash flow forecast from memory, and making multimillion-dollar decisions in his head. I had never seen anything quite like it before.”

As a middle-market retail chain with a history stretching back more than a century, Fischer and the organization as a whole had some catching-up to do. Having outgrown Peachtree accounting software, Betteridge was stuck in a holding pattern common among many businesses of its kind: too big to make a quick strategic pivot, but too small to take advantage of their successes.

From a F&A perspective, Fischer needed to quickly implement a scalable operating model and business planning practices to have any hope of reaching the company’s $500 million goal. He needed the right people, proven processes and best-in-class technology to get a world class finance & accounting capability.

“The executive team was accustomed to looking at revenue and expenses only twice per year, many months after the fact,” Fischer said. “We needed a robust financial measurement infrastructure in place to successfully navigate our business transformation.”

After years of completing these tasks by hand or even from memory, Fischer and Betteridge were going to need help wrangling everything into one centralized format. To do this, Fischer knew to look outside the company. He came across a CFO.com article titled: “One Way to Stay Focused on Growth: Outsource Accounting.” and decided to explore a new option that he didn’t even know existed. “We needed a strategic partner to help us build a world-class finance and accounting capability, and Consero proved to be the perfect fit,” said Fischer.

Although he had experience with outsourced F&A providers at previous positions, Fischer knew that working with an outsourced team could be difficult, especially for such a sensitive business function. And an even bigger challenge would be first convincing the Betteridge executive team to sign on.

“Outsourcing routine business functions is common and I’ve had good experiences in the past, but what sets Consero apart was having one point of contact that established a proactive business understanding and partnership with us,” Fischer said. “Working with Consero’s VPs of Finance takes the pressure off, and as a CFO or CEO, knowing you will be dealing with a finance pro is a big differentiator.”

For Betteridge, that pro was Consero VP of Finance Robert Witt. Upon first being partnered with Fischer and Betteridge, Witt knew he faced a tall order. Having far outgrown Peachtree, the company was mired in ages-old, nonstandard financial data that needed to be corralled. Beyond that, Betteridge was not positioned to pass a formal audit, which would make any lending or equity transactions extremely difficult.

“They were not able to obtain useful, accurate, and timely financial information of any kind,” Witt said.

Fischer admitted that he himself was wary after choosing to partner with Consero and beginning the task of migrating Betteridge’s accounting operations over to Consero’s financial management platform, including the Intacct accounting system. With a timeline of just three months to complete the transition, Fischer assumed such speed was optimistic at best.

“Initially I was skeptical. I didn’t understand how that was feasible, but we delivered right on time,” Fischer said. “After starting the migration in January [2017], we went live in April, even completing a second project to clean up and audit 2016 data at the same time.”

While migrating Betteridge financials over to the Consero platform, Fischer and Witt also worked to clean up the previous year’s data to prepare it for reporting and auditing. This job could have consumed several months of time on its own, but it was completed concurrently with the transition project. As Witt explained, Consero’s fine-tuned systems and transition process made it possible to complete both projects on time.

“We focused on cleaning up only what was essential to pass an audit and get them the historical perspective needed to start looking forward,” Witt said. “Being able to quickly bring the right resources and a comprehensive pre-built financial management platform to the table as needed in support of their needs is a core element of the Consero model and something Betteridge can look forward to as they execute their strategic objectives.”

From there, Fischer was able to easily set up a weekly cash flow forecasting model and had just finished compiling the company’s first monthly financial report. Rather than working with only a broad overview of mismatched data, Fischer and his team could now go line-by-line on a monthly or weekly basis for real-time updates on earnings, expenses and objectives. This gives him the crucial ability to take a step back from the numbers and quickly make strategic decisions.

“The evolution of finance has brought strategy to the forefront. It is less of core finance & accounting. The finance team in any business needs to be a strategic partner now more than ever,” Fischer said. “That means the CFO needs to drive strategy through their financial capabilities and worry less about routine bookkeeping.”

Without Consero, Fischer estimated these projects alone would have taken more than 12 months and required hiring a controller along with numerous staff positions. Instead, Betteridge avoided organizational bloat, utilizing Consero’s pay-what-you-need model to build out only as much as they needed. But it wasn’t purely the cost savings that ultimately sold Fischer on Consero.

Consero has allowed Fischer to be a thought leader for Betteridge.

“The people, process and technology that they bring to the table are very aligned with processes of enterprise companies. The time saved, the ability to scale and the talent Consero provided were the biggest factors for us,” Fischer said. “Working with them has been a refreshing experience, and it’s given us a better way to make decisions.”